The Oregon Trail is a computer game originally developed by Don Rawitsch, Bill Heinemann, and Paul Dillenberger in 1971 and produced by MECC in 1974. The original game was designed to teach school children about the pioneer life on the Oregon Trail. 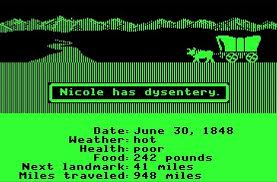 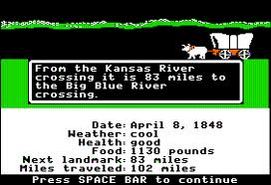 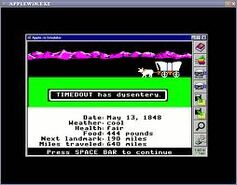 Another character has dysentery.

"you have lost:20 bullets 5 sets of clothing Jovanni (drowned)"
Add a photo to this gallery
Retrieved from "https://oregontrail.fandom.com/wiki/Oregon_Trail_(computer_game)?oldid=4019"
Community content is available under CC-BY-SA unless otherwise noted.