Players type their name, then select their role as a Greenhorn, adventurer (allowed to choose paths at trail forks, but can be a Greenhorn if morale falls too low, but can be re-elected in the future), and a trail guide, who does what an adventurer does, is paid well, but can be fired if morale falls too low, which ends the game. The player chooses an occupation then he/she chooses the time to travel. Then, finally, the player chooses the people who are coming along and their ages.

The player can select an occupation. Here is a complete list of the occupations.

Most occupations have skills, but some don't. The player can customize the skills by clicking the word Skills near the bottom left corner. There is a 120 point limit. The skills that are automatically selected are free. Unused skill points will give a higher score at the end.

Each occupation, except one, has a bonus. The banker has the most money, but does not get a bonus. All occupations starting as a doctor, which has a 1.2x bonus. and a teacher, has only $500 but has a 5x bonus.

On the trail, players will encounter many historically accurate landmarks, rivers, forts, and trading posts. The landmarks will change with time, as they did in real life. For example, if the player travels in 1860, there will be many trading posts, but those wouldn't exist in 1840. Furthermore, some of the trading posts and forts that exist in the earlier years become abandoned in later years.

Here is an incomplete lists of the random events that can occur during the game:

There is a mini-game along the game. The players can choose between three guns, the pistol, the shotgun and the rifle. The pistol is only for killing rodents, the shotgun is for killing birds, and rifle to kill any animal. When the player misses when targeting, the animals go faster, thus making it difficult.

Besides getting fired as a trail guide, the other way the game ends is when the player dies. This can be due to:

A game that is similar is Oregon Trail 5th Edition. It has new features. It has a video when crossing rivers. It also has a fishing feature too. And finally, the cutscenes and the journal videos plays at certain places.

Main screen of the game 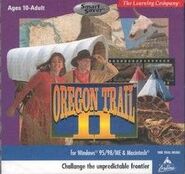 The box art for Oregon Trail 2
Add a photo to this gallery
Retrieved from "https://oregontrail.fandom.com/wiki/Oregon_Trail_2?oldid=4114"
Community content is available under CC-BY-SA unless otherwise noted.